I know I know.  Some people don’t know what America is and couldn’t find it on a map.  As for “Abstract Expressionism” no, no.  Forget it.  Anyway, the book “The Turning Point”, still by April Kingsley, it’s like taking a course.  You learn a lot.  I just wanted to share with you a very, very small sampling… 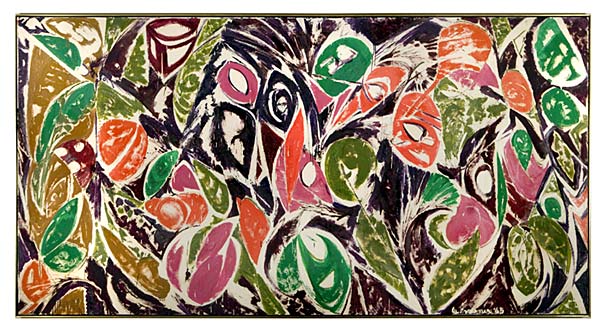 Paintings not to scale.  Not for sale either.  Usually they’re pretty big.  You won’t see any of them at the Guggenheim either but that’s okay.  You’re seeing them here.  For anyone who knows the subject these artists might not be the first that come to mind.  They’re artists, poor me, that I’d never heard of.  You stay around long enough and maybe you’ll see what you’ve been missing.  I like that.  Thanks for the opportunity.

Another of the many, many things I found interesting about the book is that the author mentions the writer Malcolm Lowry.  That could be because, like him, many of the artists covered in the text, although my no means all, were well acquainted and some too well acquainted with alcohol.

But the quote she attributes isn’t entirely accurate.  The original is in Lowry’s long story, Through the Panama, and goes like this:  “Gin and orange juice best cure for alcoholism, real cause of which is complete baffling sterility of existence as sold to you”.

Interestingly also, and I’m almost done, Lowry mentions Kierkegaard’s Diary of a Seducer in his story, the work Arshile Gorky used as the title of his, lets face it, weird painting above.  Most of Gorky’s paintings were weird.  Powerful and weird.  Gorky did himself in at the age of 44, poor fellow.

I love that line she delivers about Hans Hoffman.  “…finally gave up recognizable subject matter entirely…”  Must have been a great day for Hans.

One more re Robert Motherwell:  “Chance had brought him to the solution to a painting problem he’d been wrestling with for a decade–how to create disparate elements within a unified field without disrupting its unity.”  Exactly.  Applies to any art form.

I gotta go now.  There’s a small dog from Texas I gotta see about.