Close enough.  Jon Guy packed it April 16. Long time islander first came to these shores in 1978.  Didn’t know him but saw him around and knew who he was.  He was a central figure in the island community.  He was 66 which ain’t near old enough for a tour of this planet.  It is.  It’s sad.  Obit in “Island Tides” http://www.islandtides.com/ out of Pender Island by his wife/partner Priscilla Ewbank who has also been writing “Saturna Notes” in the paper for years.  Didn’t know they were connected.  Never met her or even know what she looks like but it must be terribly sad to lose your other half like that, before his time.  May the Lord bless her.  And him.  Jon had gone into a partnership with the Schaeffers on the lower store and pub by the ferry back around 2006 or 2007.  The Schaeffers died in that plane crash on take-off out of Saturna in November 2009.  They were our immediate neigbours to the west.  So no one in that partnership is around anymore.  John Giorno was right.  Life is a killer.  The planet stumbles on but the contestants come and go.  And it is.  It is.  A stranger’s sojourn.  Marcus Aurelius nailed it.

Death is a strange thing.  It effects you.  I never met the man but I knew who he was.  I was thinking about him.  I was sitting in the rec centre with a lot of other people Saturday afternoon for the Orca Tour 2014, Saturna Island date, and I was still thinking about Jon Guy.  How can you just up and die like that?  Words are inadequate and you can’t do a thing about it.  I was sitting there listening to Richard Blagborne doing the introductions for the presentations by Erich Hoyt and Paul Spong and I was thinking, yes, this is a community.  I’ve always wondered about this concept of a “community” because it’s something I’d never really felt myself, never felt part of any community.  But here, without a doubt, was a community.  A community of people interested in Orcas and what those Orcas represent.  And interested in preserving what they represent.  You remember Erich Hoyt.  He wrote a standard work, “Orca. The Whale Called Killer.”

The island had taken a hit with Jon Guy’s passing.  I could feel the sense of loss at the main store, in whose operations he had played an integral role.  How could he just disappear like that?  I think people were still a little bewildered.  He was still working two weeks before he died.  But for the living life goes on.  I forget who said that.

We met an islander whose work we’d seen in the cafe gallery.  It’s always interesting to put a face to a name.  States bought me a linoprint by Karen Muntean and we went to pick it up at her place on East Point Road opposite Russell Beach.  We’d driven by the house a thousand times so it was interesting to be in the house and looking down at the road, the beach or “Banks” beyond, and the Strait of Georgia and the mainland beyond that.

Back at the place some serious weirdness was going on in the San Juans.  A tongue of rainbow was sticking out of Skipjack Island.  Our timing was perfect because the phenomena lasted about 30 seconds. 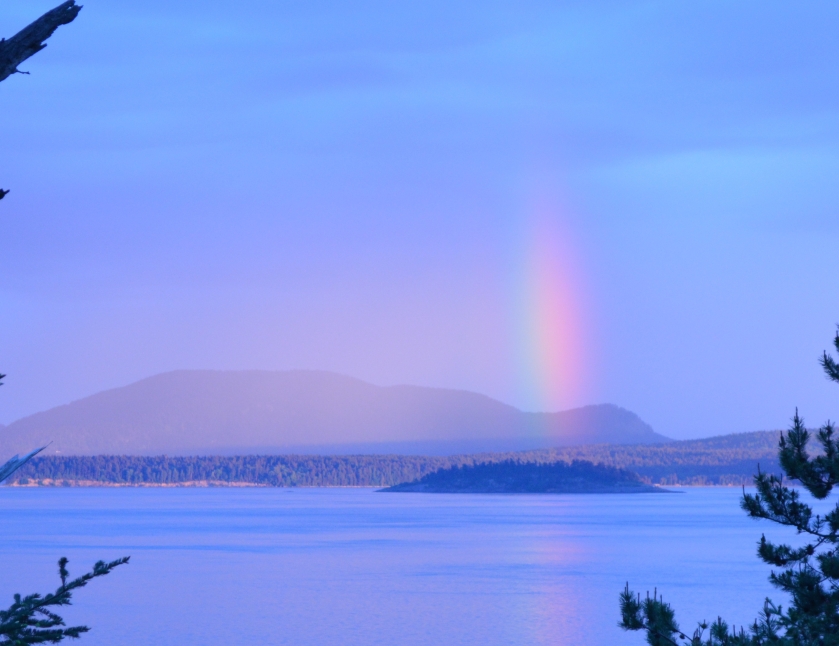 You can’t make this stuff up.  I forget who said that.  There’s that echo again.

We’ve made it to The Tyee Blogroll http://thetyee.ca/BCBlogs/ so I guess it’s time to ‘straighten up and fly right’.  So keep the cards and letters, cheques, comments and recommendations flowing, y’hear?  Thank you.

5 thoughts on “Ides of May”