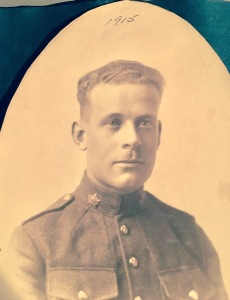 William “Billie” Nicol enlisted for the Canadian Over-Seas Expeditionary Force on February 22. 1915 in Toronto, Ontario.  His “Attestation Paper” was witnessed by G. Fowler and certified by the Lieutenant Colonel commanding.

William “Billie” Nicol was 5 feet 9 inches tall with a complexion described as “Fresh”.  His eyes were listed as “Blue” and his hair “Fair”.  His distinctive marks included a mole low on his back and 3 vaccination marks on his left arm.

As William “Billie” Nicol could see at the required distance with either eye, and because his heart and lungs were healthy and he had the free use of his joints and limbs, and because he asserted that he was not subject to fits of any description he was considered “Fit” for the Canadian Over-Seas Expeditionary Force by the medical officer attending.

William “Billie” Nicol had been born in London, England and had emigrated to Canada on his own at the age of 14. He’d worked on farms north of Toronto and around Davidson, Saskatchewan and at the McLaughlin Carriage company plant in Oshawa, Ontario.  When he received a small inheritance from England he enrolled at Elliot Business College in Toronto to study accounting and graduated from the program.

In May 1915 William “Billie” Nicol was back in England as a soldier in the Canadian Army. He’d made sergeant.  He landed at Plymouth and boarded a train to Dibgate Military Camp near Folkestone where his unit was put up in tents.

Due to the vagaries of war-time military requirements William “Billie” Nicol found himself on a boat sailing back to Canada just as his unit was due to sail for France.

He’d been ordered to escort, with other NCOs (non-commissioned officers), a group of soldiers deemed mentally unfit for duty who were being returned home for further treatment.  Upon fulfilling this duty William “Billie” Nicol went on three month’s leave. He finally sailed back to England and was posted to Witley with the rank of Staff Quartermaster-Sergeant.

As Staff Quartermaster-Sergeant William “Billie” Nicol was in charge of the disposition of rations for all troops and horses at Witley and passed most of the war in this duty.  It wasn’t until 1918 that he found himself in France where he continued his quartermaster duties and was involved in the final push, as it was called, at the Somme.

Aside from the occasional bombing run by German planes the greatest danger William “Billie” Nicol faced during the war to end all wars was the Spanish flu epidemic of 1918.

He contracted the virus at St. Omer and became seriously ill.  In a short autobiographical sketch written in March, 1972 he put his survival down to the ministrations of a German prisoner of war who spoke very good English and who managed to nurse both Nicol and a fellow NCO, both of whom had been quarantined in a tent and left to fend for themselves, back to health.

William “Billie” Nicol was repatriated to Canada with his bride and received his discharge from the army in Toronto in December, 1918.  Within a short period of time he moved with his wife and young child to the west coast of Canada.