Dodging about the archives again like a Saint Joseph’s monkey.  You notice a lot of trash in these Matthews street shots.  1942.   The first generation of street trash bins obviously hasn’t been born yet.

Not only is it a trashy city it’s all wires.  Forget “City of Glass”.  Wires.  It’s wired.  I wish I knew what I find so fascinating about these pictures.  It can’t just be because I lived in this neighbourhood many decades later.  So what is it with things that happened before I was born?  It’s okay.  It’s just something on the windshield. 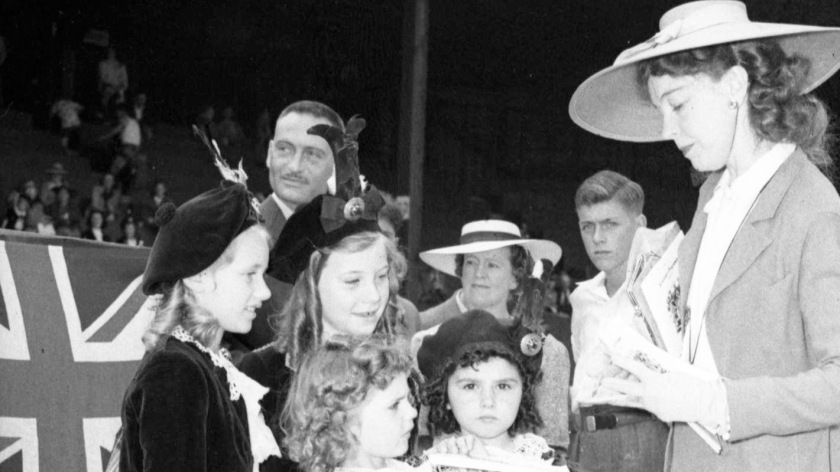 Lillian Gish comes to town 1942.  Hollywood royalty.  I once rode in an elevator with Miss Gish.  I thought to ask her if her luggage had been found but I was an awful shy little boy.  The airline lost her luggage.  It was many decades after this picture was taken.  The mayor was with me that evening too.  And quite a few other people.  I believe Miss Gish was 88 at the time.  “Commandos Strike At Dawn” in which she starred with Paul Muni and Sir Cedric Hardwicke was released in 1942. 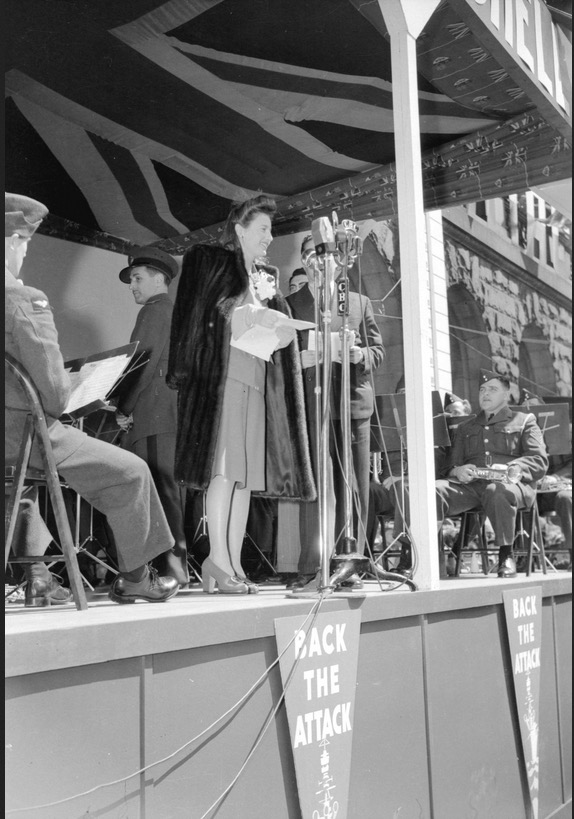 Barbara Stanwyck 1942.  Hollywood star.  War effort again.  “Back The Attack” war bonds drive.  It looks to have been a fine sunny day.  I can just hear that band.  Hit it!

Save these bud-lipped children.  Don’t they deserve a chance?  They’re looking up to you for help.  They’re a bit worried about the future, and everybody knows what that’s like.  Can’t you spare a few centavos?

There were also a vast number of large billboards around to go with all the trash in the streets but there was a war on, fortunately very far away.

Then there was “Trotsky” the Siberian bear.  He lived in that really old bear prison with the steel bars painted green they had in the park at the time, before they dug the pit and put the bears in there.  Not Trotsky though.  But the past is discontinued.

But it’s still City of Wires.

Who will pray for the streetcars?  Because streetcars have an essential spirit that can’t be extinguished.  It’s obvious.  You can rip out the tracks and burn up all the old streetcars but you will never extinguish what’s in our hearts.

Here’s to a safe and pleasant journey.  Thanks very much.

8 thoughts on “The Last Streetcar”