Good bones and powerful flyers.  Passer domesticus.  The stalwart little feather-bearing flying creature, the sparrow.  That’ll be House Sparrow to you, buster.  Let’s wise up.  This is National Geographic.  If I don’t get home tonight it’s not because I haven’t tried.  I’m a baby.

If help can be given it should be given.  That’s what the old man always said.  When it’s over it’s over, he also used to say.  Not until the fat lady sings was another one.  Lord, how I despised my father.

But we’re not getting into that here.  We’re studying the sparrow.  The issue every spring is how many young sparrows are going to make it?  And I mean make it generally.  I’m sorry. I’m mimicing my father again.  I take back all I said about him.  Moving on.  He used to say that too.

The House Sparrow.  A bright chirp!  and onto the little cage holding the brick of suet, which is attached to the budding wisteria on the upper deck.  Ringside seat.  It’s a chirp-fest and a lot of horsing around on the cage.  Can a bird horse around?  Of course it can.

The House Sparrow is one of the harbingers of spring.  Sure it is.  And if somebody, like a child, should ever ask you what kind of bird that is, don’t ever say, “It’s just a sparrow.”  I made that mistake once.  Sparrows will get in your face.  “Whadya mean ‘just’ a sparrow? I’m a sparrow, fool!  House Sparrow!  Don’t forget it!”  Flibb flibb! 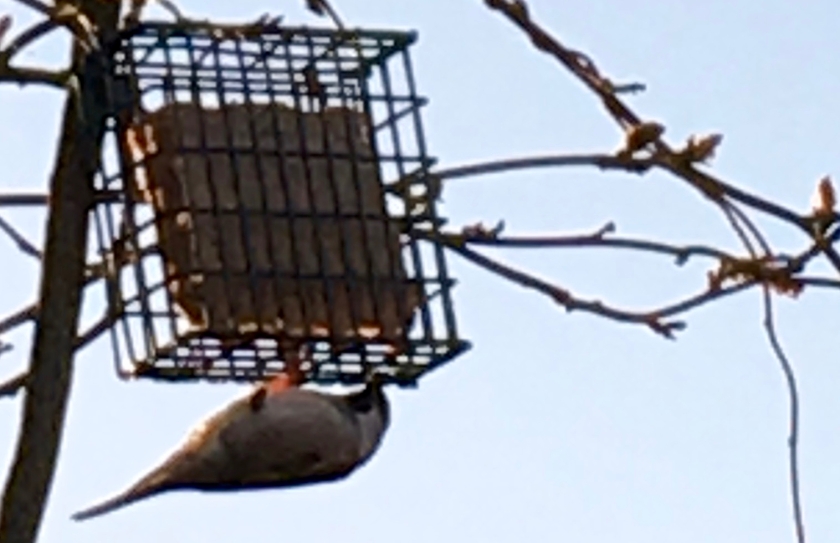 That fine piece of art work is gone.  Urban art work?  Is that what it’s called?  It went down with the building.  The piece was at the rear of the building that used to be on the southwest corner of 7th Avenue and Cambie Street, Vcr.  Just another teardown.

I don’t know that much about Ken Foster, only what I’ve seen on the interwebs, but this work reminds me of Rod Filbrandt, the justly celebrated creator of “Wombat”.  You’re not gonna make me explain “Wombat” are ya?