The security guard was upset. And so he should have been. An armed guard had been shot four times that morning in Toronto. He’d survived and was in hospital. The security guard heard about it on his break and when I got back from lunch asked if I could bring the story up on my phone at my next break.  I did that before the break, and passed him the phone.  After reading the story, when we had a moment, he said, “That’s the company I used to work for.”

I knew what he meant because there’s a lot of companies I used to work for.  But I never worked for one where you carry a deadly weapon and also someone might try to use one on you.  I never did that, so I’m always interested in people who have.  Why not?

We chatted a bit in another brief conversation a bit later that afternoon.  It was up near the high-end Napa Valley stuff.  Good stuff.  The guard talked about working for that company and told me a short story about being on the firing range, practising with the standard issue Smith & Wesson .38 revolver.

He’d forgot his speed loader and the boss was ticked because it was supposed to be part of the training session.  How to get more rounds into the weapon speedily.  Before they kill you.  I looked it up later.  I was getting an idea of what it’s like to do that, to “pack” or “carry” a gun, all those clichés.  It’s not always really well paid and can be mostly routine and very ordinary and job-like and not always really well respected.  Until the day comes when somebody starts shooting at you. 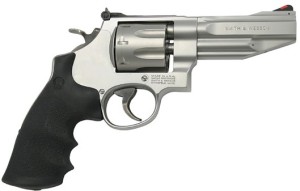 It’s a serious subject.  ‘We know the power of the gun.  We wear the scars of the violence.’

‘Gun Crazy’ is a very good film.  It’s older than me.  I remember right here and now, right off the top of my head, ‘I just like guns.’  Good old B&W feature.

There’s been gun violence in my neighbourhood, and probably in yours.  Maybe not.  The people doing the shooting don’t think about it as ‘gun violence’.  It’s strange to hear from someone in the same work situation as you that he used to work for a company where people get shot.  I never did that.  It needs repeating.

I’m reminded, I don’t know why, of the police constable from right around here in our town, who lost his gun.  VPD. I can’t remember if he got it back or what, but it was one of these.  I found it for him.  I’ve had it on file it for awhile.  The much traveled Sig Sauer P225. 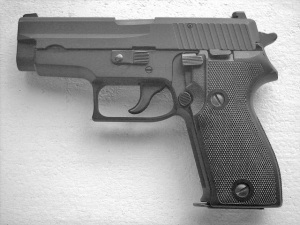 I was also reminded, in the midst of all this gun craziness, of a TV news item already quite a few years ago but I’ve never forgot it, of a police arrest of a youth, a young man out in Surrey, who didn’t look like he was more than 12.  He had a loaded nickel plated .45 pistol on his young person.  I remember thinking, ‘What the heck is it with that?’  I looked up ‘nickel plated’ later.

Almost immediately there were stories about the Toronto heist fail and the goofy, deadly goons including courtroom sketches.  Three young men.  Not old enough to drink or vote and, apparently, the second time they tried.  Well get on with it lads!  Why not?

So it’s come to this. The end of the post about guns.  They’re beautiful, really.  They’ve got style and sophistication.  They carry some weight and that feels good in your hand.  I’ve experienced that part.

All right hold it down.  I know, I know.  You need to see what a nickel plated .45 looks like.  Especially after all this. 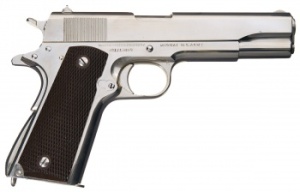 The kid.  The child.  With this beautiful weapon under his little plaid shirt. Sheesh-ya!  Stay in touch!